This is a short biography of Samuel Richardson of Woburn, Massachusetts Bay Colony -
my paternal 8th Great-Grandfather


He remarried to Hannah Kingsley the following year and early in April 1676 she gave birth to a healthy daughter. One week later, on 10 April 1676, while Hannah nursed the newborn in bed, Samuel had his six-year-old son Samuel with him, carting manure to the fields. Suddenly they heard screams coming from the house, and saw feathers flying from the terrified fowl in the front yard. Samuel raced back with his boy to find his wife slaughtered in the bed. Their nurse who had been helping the new mother in her recovery from the recent birth had tried to save the infant, but had dropped her outside in her haste to get away. The pursuing Indians had dashed the baby's brains out. Dead too was little Samuel's twin brother Thomas, age 6.

Samuel Richardson and a group of his neighbors went out to find the Indians who had massacred his family. They came upon a group of three Indians and there was a skirmish in which one of the Indians was killed and the other two fled.

This horror took place against the backdrop of the King Philip's war, which had begun in June of 1675 and would continue until late summer of 1676. During this armed conflict between the local Native Americans and the English, in which our Samuel served, many colonists were attacked in such a manner and even whole villages were wiped out, the English inhabitants slaughtered or driven away. A dozen villages across Massachusetts and Rhode Island were thus eliminated before the killing ended after “King Philip”, or Metacomet, the leader of the Indian faction, was killed in August 1676. However, the war continued with ongoing raids occurring, mostly in what is now Maine, until a treaty was signed in April of 1678. 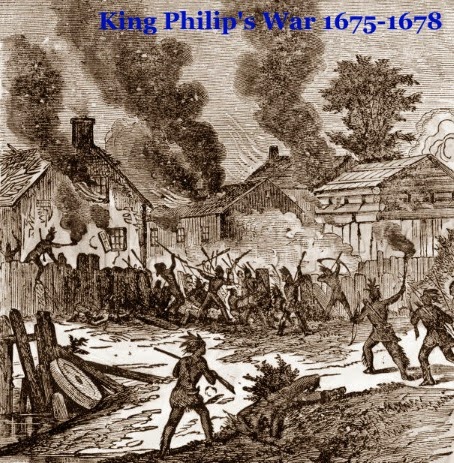 The King Philip's war is considered by many historians to be the deadliest war in American history. In the short space of sixteen months, twelve towns were obliterated, and over half of all New England towns were attacked, sending the colonial economy into a tailspin. The English population was decimated. Nearly a tenth of all military service aged men were lost.

The best book and reference that I have so far read about this tragic series of events in American history is Flintlock and Tomahawk: New England in King Philip's War by Douglas Edward Leach.

Age: 53
Location: Cape Cod, Massachusetts, USA
Web Page: http://www.castle.ladykatharine.net
I am an amateur genealogist, learning all the time. Would love to hear from you!

Surnames in this Blog: